Hell on wheels Wiki
Register
Don't have an account?
Sign In
Advertisement
in: Characters, Males, Minor characters,
and 2 more

Daniel Johnson was the foreman of the Union Pacific Railroad, Cullen Bohannon's predecessor.

Prior to joining the war, Johnson was a self-proclaimed "Copperhead", though he later joined the Union army and became a captain. He served over Lieutenant Tanner, Sergeant Frank Harper, Corporal Buckton Prescott, and Private Wustner, all who were later killed by Cullen Bohannon. Johnson's right hand was shot off sometime during the war by a Confederate wielding a Griswold & Gunnison revolver, much like the one Bohannon carries. Though Johnson didn't originally think the war right, he "blossomed" when he did join. He admitted he crossed lines he never thought himself capable of crossing.

Sometime before the end of the war, Johnson and several other Union soldiers in his unit came upon Bohannon's tobacco farm in Meridian, Mississippi. They burned the house and the barn, killing Bohannon's son, who was hiding in the hay loft. They also most likely raped Mary Bohannon, though this has never been overtly stated (Bohannon seemed to believe something traumatic happened to her that caused her to take her own life). One of the men, the sergeant, according to Johnson, strangled Mary and hung her from the porch.

As the railroad foreman, Johnson was a ruthless boss and was hated by most of the men. ("Immoral Mathematics")

Johnson's job put him in charge of hiring new men and assigning duties. Upon meeting Cullen Bohannon, he put him to work as a walking boss for the Freedman Cut Crew as Bohannon once owned slaves. While watching the same cut crew work, Johnson beat one of the workers, William, for getting a drink of water before break time. His horse, startled by a nearby explosion, reared and struck William in the head, killing him. Elam Ferguson, a friend of William's, blamed Johnson for his death and planned to get revenge on him.

Later, Bohannon joined Johnson in the Starlight Saloon. Johnson quickly saw through Bohannon's attempt to make small talk as he had already recognized Bohannon as the killer of his Union comrades by the Griswold he carried. When Bohannon questioned him about Meridian, Johnson threatened him with his Remington revolver and forced him outside to talk. Bohannon told Johnson Mary killed herself because of what they did to her. Confused, Johnson told him that Mary didn't kill herself but was, in fact, murdered by "the sergeant", who also worked for the railroad. Elam jumped from the shadows and slit Johnson's throat before he could tell Bohannon the name of the sergeant. ("Pilot") 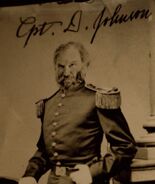 Johnson as a Union army captain
Community content is available under CC-BY-SA unless otherwise noted.
Advertisement