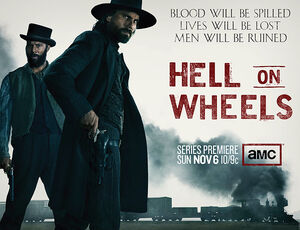 Hell on Wheels is an American period drama television series, that is set during the building of the Transcontinental Railroad. It is written and produced by Joe Gayton and Tony Gayton and developed by the American branch of Endemol. It premiered on the cable channel AMC on November 6, 2011.

Hell on Wheels follows the journey of former Confederate soldier Cullen Bohannon who travels westward to Nebraska in the 1860s to seek vengeance for the death of his wife Mary Bohannon by Union soldiers.

Community content is available under CC-BY-SA unless otherwise noted.
Advertisement